I have featured wrestling legend Ric Flair several times here, because he is the biggest name in wrestling many friends have met.  Today though, the biggest name in wrestling is pictured with one of the most underrated names in comic cons.  Don't be surprised if Adolfo ends up as one of the biggest names in comic cons sometime down the line.
Adolfo is the man behind Days of the Dead, the little comic con that has grown into five events every year around the country (Atlanta, Chicago, Indianapolis, Los Angeles and Louisville).  Don't be surprised if more cities are added soon.  He's only been doing this for a few years and already it has grown into big events.
Right by his side is Carrie, his beautiful significant other.  These two appear to be a perfect match.  She is just as much of a blur at these conventions as he is.  Together, they are the dynamic duo who oversee a very smooth operation.
He is pretty low key.  Adolfo doesn't post tons of pictures of him with celebrities, but the ones he does are usually important ones to him.  When he posted this picture with Ric Flair, the significance of it hit me.  Adolfo and Days of the Dead are in the early years of a great run.  Check out DaysoftheDead.net to get in on the fun! 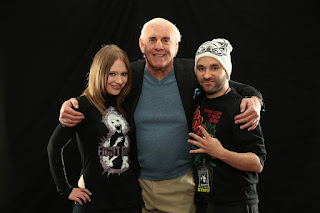