The oddest things can propel you to stardom in wrestling.  Scott Taylor is a perfect example of this.
Taylor joined the WWE as part of their lightweight division.  He transitioned into a tag team with Brian Christopher.  They jelled as a team and started to develop their routine.  Part of the fun was when Scotty would do "the worm" on a fallen opponent.  It was silly and unrealistic.  The opponent would have to be unconscious not to recover during the time it took Scotty to rev up the crowd and perform the maneuver.  Still, Scotty and "The Worm" were super big hits with the fans.
That was all 1998-2001.  Since then, Scotty has wrestled for various companies and promoters.  "The Worm" is still very much in demand.  I was at the Blizzard Brawl last December and I witnessed the fans go crazy at the first signal of Scotty doing his move.  It was unreal.
I write this not to belittle Scotty or his wrestling talent.  Scotty made it to the WWE without any fancy gimmicks.  He was undersized, but worked hard at his craft.  However "The Worm" came to be, it was his charisma, timing and connection to the audience that made it a hit.  I credit Scotty for making something as goofy as this into a lasting bit. 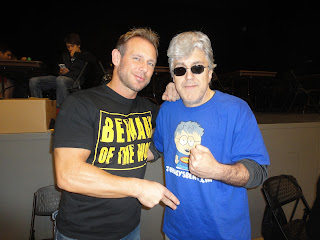