Jockey Victor Espinoza is a native of Mexico, which explains his connection to the geographically close San Diego Padres.  He appears to be wearing a Monsters drink cap for this Celebrity Jersey Card, but I'll still give him points (even though it's not a Padres cap).  He has won the Kentucky Derby three times.  He was also the oldest and first Hispanic jockey to win the Triple Crown. 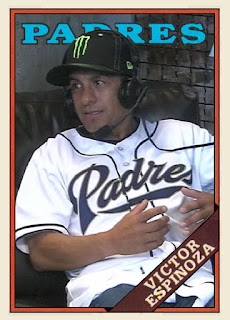 New Hampshire native Sarah Silverman donned the old school San Diego Padres jersey for her turn at bat in a charity game.  The comedian looked great in the brown and yellow.  Is the #6 for Steve Garvey, since it is an old school jersey?  (Trivia side note: Keith Moreland was the last Padre to wear #6 before it was retired.)  It was good to see Sarah take the number out of retirement for her Celebrity Jersey Card. 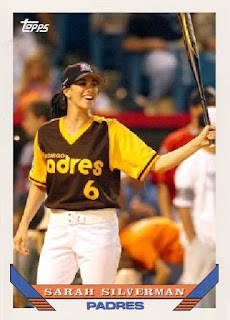