Oklahoma native Kristin Chenoweth has an impressive career which includes Broadway, the big screen and television, as well as concert halls.  One of her better known roles was on tv's The West Wing.  The versatile performer gives us one of the cutest pictures on a Celebrity Jersey Card.  This youthful beauty is almost 50.  Let that sink in. 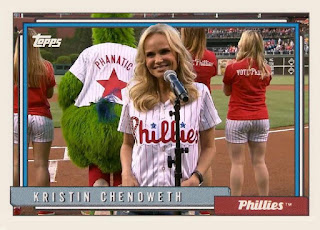 Television financial adviser Jim Cramer is a native of Pennsylvania and he did not stray far from his roots to throw out the first pitch for the Philadelphia Phillies.  This is one of those Celebrity Jersey cards which I think really has the feel of the original set. 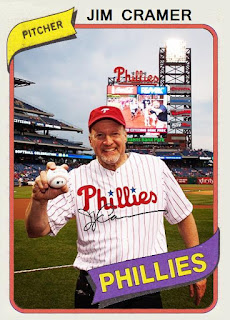 Great to see some Phillies cards in this awesome series of cards!