Mixed martial artist Johny Hendricks was born and raised in Oklahoma.  The Texas Rangers would be the closest baseball team for him and he showed his support while throwing out a first pitch.  He gets extra points on his Celebrity Jersey Card for the title belt and for performing with some sort of arm support.  Isn't his first name just begging for a "G" after the "N"? 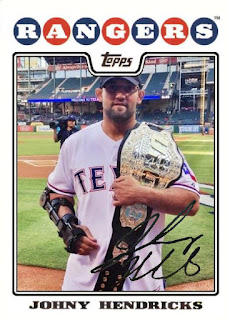 Demi Lovato rose to fame via the Disney Channel.  The Dallas native repped her hometown jersey for her first pitch.  It's hard to criticize this young beauty, but I take points off for her wearing a jacket over her jersey on her Celebrity Jersey Card. 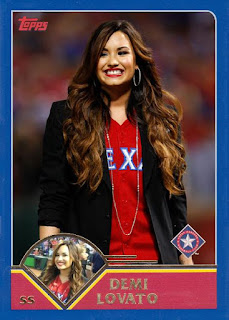