This is a regular series where I create virtual trading cards for celebrities wearing sports jerseys.

Sportscaster Erin Andrews was born in Maine, but moved to Texas and later Florida in her youth.  Somewhere along the way, she became aq fan of the Green Bay Packers.  She went all out for her Celebrity Jersey Card by wearing the helmet along with the jersey.  The #52 is for Clay Matthews and her hair extending out is like his, too.  That's the end of their similarities though. 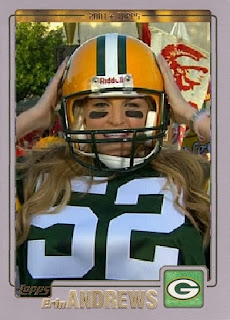 Brent Seabrook has been a key part of three Stanley Cup championships for the Chicago Balckhawks.  A native of Canada, the defenseman has played his entire career for the Hawks.  For his Celebrity Jersey Card, he is wearing his usual #7 and so is his child (presumably Carter Seven). 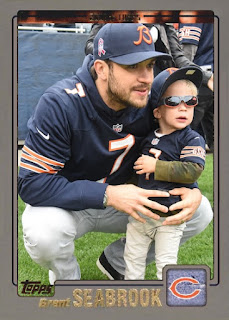