Michael Kingston is the writer-creator of Headlocked, a wrestling comic book.  Headlocked isn't your average wrestling comic though.
Most wrestling comics (or stories) feature wrestlers in unfamiliar scenarios.  They are either superheroes or superhuman in some way.  They battle everything imaginable, except other wrestlers.  Headlocked was Kingston's response or actually his solution to this situation.  It is the story of Mike Hartmann, a young theater major who drops out of college to pursue his dream of becoming a professional wrestler.
Hall of Famer Jerry "The King" Lawler was so impressed by the concept that he signed on as the cover artist.  Since then, other wrestler contributors have included Rob Van Dam, Hurricane Helms, Ken Anderson, Christopher Daniels, Sam Shaw, Sinn Bodhi, Booker T, John Morrison, Frankie Kazarian, AJ Styles, Tony Atlas and more.
Kingston is a long time wrestling fan.  He cites falling in love with wrestling after seeing George "The Animal" Steele perform.  It was his great love of wrestling that lead him to honor the sport in a realistic manner, as opposed to a falsely larger=than-life way.  Wrestling is entertaining enough, with no need to make outlandish stories about it.  Kingston felt wrestling deserved a realistic portrayal and he made it happen.
Kingston can be found at many comic cons or you can go to Headlocked.com to get more info about him or the Headlocked series.  The other benefit of seeing him at a comic con is that he is usually accompanied by a wrestler or two. 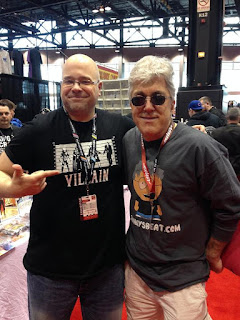