This is a regular series where I create virtual trading cards for jersey-clad celebrities.  This is a special Mascot edition.

Soccer legend Brandi Chastain was born in San Jose, CA.  The former Olympian and pro player posed with SJ Sharkie on this special Mascot Edition Celebrity Jersey Card.  She made headlines years ago for her sports bra incident, but I think she looks equally good in her native San Jose jersey. 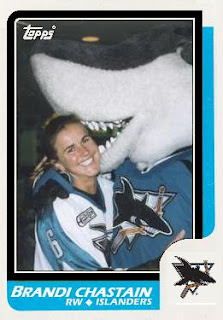 The Geico Caveman first appeared (came out of his cave?) in 2004 to start a series of very popular commercials.  Unfortnately, those commercials did not translate into a successful television show.  Still, the character itself remained popular.  His appearance at a Capitals game earned him his place on a special Mascot Edition of Celebrity Jersey Cards.  (I must admit that it probably isn't the real Geico Caveman, but it works nonetheless.) 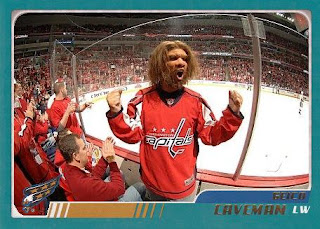 Geico has certainly created some memorable commercials. Appropriate that the Caveman is an ICE hockey fan. Love the Chastain.

That Chastain custom is awesome. Being a Bay Area native... I'm a huge fan of both Brandi and the Sharks. I went to school with her brother back in the day.