Today is a very special edition of Friendly Encounters.  It warms my heart and is one of many examples of why I love covering the Chicago Bandits.
Natalie Hernandez is one of a handful of Bandits who have been with the team the four years I have covered them.  A star shortstop at UIC, she earned her spot on the team via an open tryout.  Over her four seasons, Natalie has shown her versatility and team attitude by playing several positions.  She is also one of the most popular players.
One young fan who agrees with me is MacKenzie Parker.  Kenzie is a 12 year old softball player from Michigan who just might be Natalie's biggest fan.  Her goal is to become a professional softball player (and my goal is to someday interview her as a pro).
Kenzie and her family are big supporters of the Bandits.  They have made the trek to see the Bandits play in Rosemont and Kenzie has enjoyed the "Bandit for a Day" experience and I know the Bandits enjoyed having her there.
Obviously, this is about the special relationship between Kenzie and Natalie and there is nobody better to discuss that than Kenzie herself.  I'll let Kenzie take it from here.

I started playing softball for the YMCA when I was 4, until I was old enough to play T-ball, I love playing softball my favorite positions are pitcher and 1st baseman, though I do play other positions if my team needs me. It is a lot of fun, but a lot of hard work. I practice with my team and on my own. I have played on my travel team now for 3 years. I was 11 when I hit my first home run out of the ballpark, which was really cool.
I think one if the things I am most proud of is working hard through the fall and winter to be asked to play on the team, When I tried out I did not make the team, but the hard work I put in got me a place in this travel team. One day I hope to play in college and eventually play in the NPF. I also would like to coach someday. I often help out when my younger sister's team practices, when I can.
My favorite player is Natalie Hernandez. I really look up to her. She worked out to be part of the Bandits as I did to make my team, always giving her best in the field, hitting and helping her teammates. You can really tell she loves the game and I admire that. She also takes time for girls like me. My parents drove me from Michigan to watch a game. I was Bandit for a day. Natalie made sure to say "hi" and that meant a lot. One day I hope to be like her, and maybe inspire someone like she inspires me to always work hard and love the game. Thank you Natalie for encouraging me to do my best in softball and in school.

I can add nothing more to this.  Kenzie stated it all very well.  Thank you to Kenzie and her family for contributing here.
I encourage everyone to check back tomorrow for my interview with Natalie, featuring some questions submitted by Kenzie. It was a lot of fun! 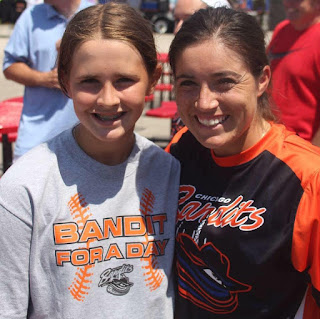 MacKenzie Parker and Natalie Hernandez in Rosemont, IL-Summer 2016.
Posted by Johngy at 6:00 AM