Cards That Never Were is a recurring series in which I create virtual trading cards for players who were missed in various sets.  It is a concept I have borrowed from too many to mention, but I appreciate all of them.
The Wshington Senators selected outfielder Tom Grieve in the first round (6th overall) in the 1966 MLB draft.  He made his MLB debut in 1970, but spent 1971 in the minors.  He returned to the majors in 1972 with the Texas Rangers (who had moved from DC).  He played with the Rangers through the 1977 season, after which he was part of a huge four-team trade that sent him to the New York Mets.  After the 1978 season, he was traded to the St. Louis Cardinals.  After only nine games with the Cardinals, he was released.  In late May, he signed with the Rangers, but never made it back to the majors.
Topps gave cards to Grieve in every set from 1971 through 1979.  Being that he spent most of 1979 in the minors, I understand why Topps did not give him a card in the '80 set.  Still, I was a fan of Grieve's and wanted to give him a "career capper" card.  Technically, this card should show him back with the Rangers, but I always liked seeing players have cards with every team for which they played.  Therefore, I gave Grieve a Cardinals 1980 card.
On one side note, Grieve was a teammate of our old friend Rick Stelmaszek on a couple different minor league teams and the 1973 Rangers.
On another side note, his son Ben was a first round draft pick (2nd overall) of the Oakland A's in 1994.  His other son Tim was a draft choice of the Kansas City Royals in the 23rd round in 1994.  Ben went on to a nine year MLB career, while Tim never made it to the majors. 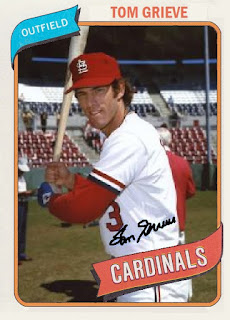