This is a weekly series in which I create virtual trading cards for celebrities wearing sports jerseys.  Today, we continue to work our way alphabetically through Major League Baseball.

Selena Gomez was born in Grand Prairie, TX.  Still a young 24, Gomez is an accomplished singer, actress, fashion designer, executive producer and more.  She also appears to be a decent hitter, as she proved in a celebrity game in Kansas City.  Either way, you have to like her form.  Her Celebrity Jersey Card features the cool powder blues of the Royals. 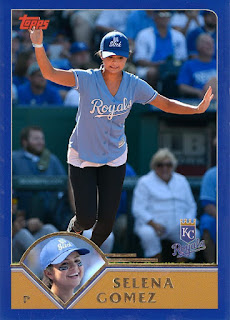 New York City, NY native Olivia Wilde is an actress, model, producer, director, activist, and entrepreneur.  She might be best known for her role on televison's House, although her resume is quite lengthy.  Wilde took part in a celebrity game in Kansas City to earn her Celebrity Jersey Card. 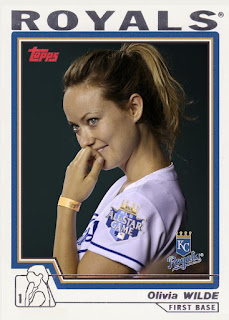