I often get asked why I love the Chicago Bandits or women's softball so much.  One easy answer is Emily Allard.
Emily is a California girl who attended college and played softball at Northwestern University.  She was selected by the Chicago Bandits in the 2014 National Pro Fastpitch Draft.  The outfielder quickly played her way into the lineup and the  hearts of fans.
Midway through her third season, Emily suffered a season-ending concussion.  She worked very hard and came back strong last season, but concussion issues lingered and her season was cut short again.  Her future in softball is in question at the moment.
Emily is a huge favorite of the fans.  There are many #24 jerseys worn in the stands at every game.
Outside of playing for the Bandits, Emily is co-founder of BeTheMomentumSoftball.com.  Emily is a slap-hitter and she is teaching youngsters the skill.  Not everyone can hit a towering home run.  Emily has used her speed and her well-placed hits to become a very valuable table-setter for the home run hitters behind her.
When I joined PL Myers on HeroTV, my first suggestion for an interview was Emily.  I figured she would be a very interesting interview,, but more important, I wanted to shine the light on her and the Bandits.  These ladies deserve much more recognition than they get.
When I asked Emily, she quickly agreed and despite a busy schedule, she met us early one Sunday morning at the Ballpark.  This was typical Emily.  Why stay in and catch more sleep, when she can be out giving of herself.
I am so happy and proud of this interview, which can be found on YouTube.at HeroTV Episode 4: Emily Allard.  We talked to Emily about her path to the Bandits, her passion, the young fans, her goals, her role models, her injury issues and much more.  You can feel the commitment she has to the sport and the young fans (and even us older fans, too).
This interviews was conducted prior to her stepping away from the game because of the lingering effects of her concussion.  Unfortunately, she made that decision about 10 days later.
Getting back to my main point, Emily is a perfect example of everything I have loved about covering the Bandits and being involved in the NPF.  The dedication of the players is amazing.  They play for little pay (and deserve much more), but it isn;t about the money.  It's about the sport and the young fans.  I see that on a daily basis around the team.
Win or lose, the players put smiles on their faces and walk the long line of fans after the game.  They sign autographs, pose for pictures and engage in a bit of chat with everyone there.The Bandits won two straight league titles, yet I saw so little coverage of the team.
I have no idea if Emily will play pro ball again.  I hope she does, but I know she will be fine either way.  She has a lot going on and she will continue to make a difference no matter where her career path takes her.
I thank Emily for her time in giving us this interview and for her friendship over the last few years.  I thank the Chicago Bandits for their continued hospitality in allowing me to do what I love.  I thank PL Myers for seeing something in me to ask me to join his show. 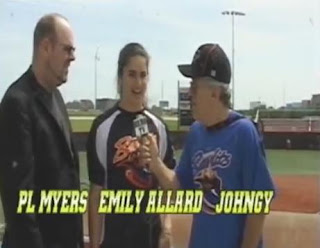