Cards That Never Were is a recurring series in which I create virtual trading cards for players missed in various sets.  It is a concept I have borrowed from too many others to credit, but I appreciate all of their efforts.
The last time I created a card for Bobby Douglass, he was pictured with the Chicago White Sox.  It was from a short-lived attempt (publicity stunt?) at a pitching career.  Today, I am filling in some card gaps in his football career.
Drafted by the Chicago Bears out of the University of Kansas, Douglass made his NFL debut in 1969.  He remained with the Bears until being traded to the San Diego Chargers midways through the 1975 season.  He then went to the New Orleans Saints for the 1976 and '77 seasons, before finishing with the Green Bay Packers in 1978.  He tried out for the Oakland Raiders in 1978, but dId not make the team.
For his efforts, Douglass got cards from Topps in 1971-1975 and 1977.  I made a 1970 rookie card for Douglas, as well as a 1978 card with the Saints.  Those were easy.  Technically, his 1976 card should be with the Chargers and 1979 should be with the Packers, but I couldn't find pictures of Douglass with those teams.  I did find a picture of Douglass with the Raiders and used that as a "what if" card. 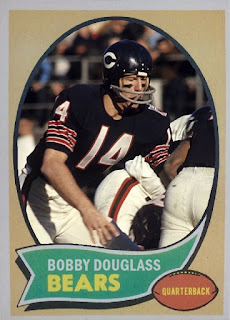 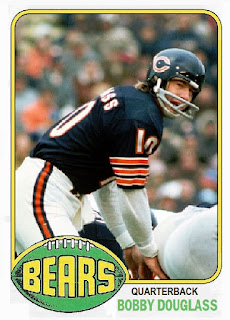 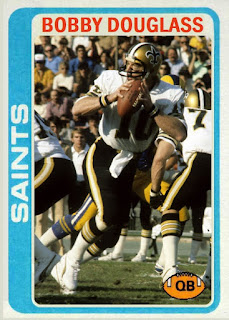 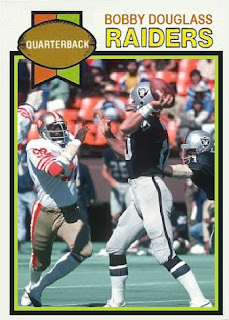 Really cool!
Mind if I "borrow" a couple of these for some image galleries I have?
www.nosaintshistory.com/saints-cards/ ?

Feel free. Thanks for asking.

Often wonder why he was number 14 his rookie year