Retired pro wrestler Steve Lombardi was born in Brooklyn, NY, despite reports that it happened elsewhere.  Lombardi had a lengthy career, mostly helping other wrestlers look good in the ring.  He did have some high profile matches, but mostly after he became known as the Brooklyn Brawler.  Of course, his Celebrity Jersey Card had to feature him in a Brooklyn Nets jersey.  I wonder if he renamed that "Boston Crab" to reflect his NY roots. 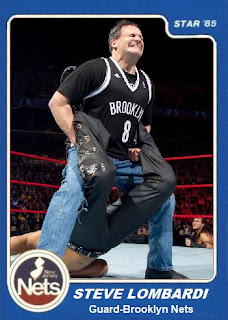 Paul Wight was born in Aiken, SC.  After playing some college basketball, Wight embarked on a wrestling career, first as "The Giant" and later as "the Big Show."  Wight suffers from acromegaly, but had a surgery in the 1990's to halt the progression.  He has had a legendary career, despite the often criticized many turns back and forth of his character.  His Celebrity Jersey Card probably features more jersey-wearing celebrities than any one I've done.  Pictured with The Big Show are Randy Orton, Ted DiBiase Jr., Cody Rhodes and The Miz.  Even among the larger than life wrestlers, he still stands out. 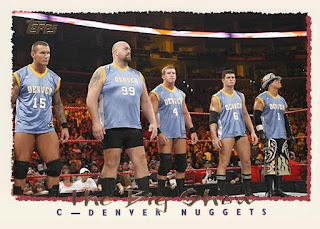