A native of Ashland, KY, Jillian Hall dropped out of college to pursue pro wrestling.  After several years on the independent scene and in WWE Developmental, she joined the WWE and had a several year run, highlighted by winning the Divas Championship.  Her gimmick of a tone deaf singer wasn't the greatest, but she did the best she could with it.  After a brief stint in TNA Impact Wrestling, Hall announced her retirement in January of 2014.  She showed her Kentucky loyalty by wearing a Louisville jersey for her Celebrity Jersey Card. 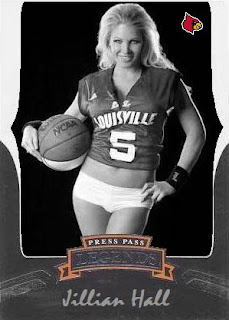 Born in Vancouver, Canada, Rosa Mendes studied Business at the University of British Columbia.  She dropped out of school to pursue modeling and became the first North American to win the "Piel Dorada," a major Latin American modeling contest.  In 2006, she competed in the WWE Diva search.  Although she did not win that contest, she was hired by the WWE.  Mendes handled several different roles in the WWE, before retiring in early 2017.  For her Celebrity Jersey Card, Mendes is repping the University of North Carolina. 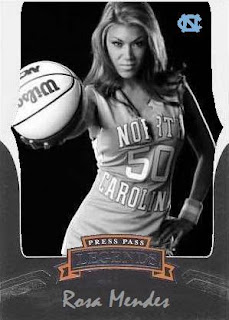