British born singer Adele Adkins is better known by her first name only.  She credits The Spice Girls as being a major influence.  She has won countless awards and sold millions of records.  Despite being a new-ish artist, I actually am familiar with her catalog, with "Rolling in the Deep" being my favorite.  For her Celebrity Jersey Card, I used a concert shot which I think works well with the card design.  I also stayed true to her and only used her first name. 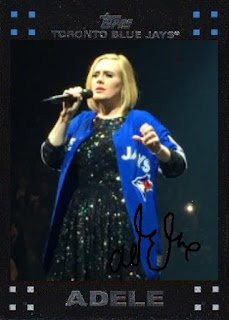 Tara Leigh Patrick was born in Ohio, but became famous as model, actress, singer Carmen Electra.  Her Celebrity Jersey Card comes from a first pitch appearance for the Blue Jays.  She gets extra points for the official cap and I won't take any away for her wearing it off-center.  It appears she is looking to the catcher for a sign.  I would love to know how the pitch turned out.  I'm guessing nobody else really cared.  Among the many charities that Electra supports is the HollyRod Foundation, started by ex-NFLer Rodney Peete and his wife actress Holly Robinson. 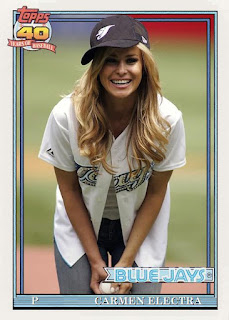