Celebrity Jersey cards is a regular series in which I create virtual trading cards for celebrities wearing sports jerseys.  Today, I continue my alphabetical journey through the Major League Baseball teams.

Actress Phyllis Smith was born in St. Louis, MO and stayed true to her roots by donning a Cardinals jersey for her Celebrity Jersey Card.  A true Cards fan, Smith stopped by the ballpark while in town for a performance at the Muny.  Smith might be best known for her role as Phyllis on tv's The Office.  I'm not sure what the article she is showing is, but I'm guessing it is The Office-related. 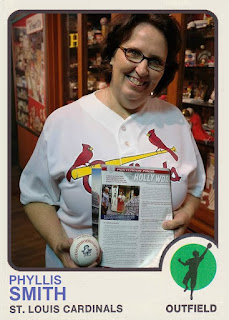 Billy Bob Thornton was born in Arkansas, but is a legit fan of the Cardinals.  His childhood dream was to play for the Cards, but at least he got to throw out a pitch for them, while also earning a Celebrity Jersey Card.  He narrated The 2006 World Series Film about the Cardinals' championship season. He is also a fan of the Indianapolis Colts, but I have no picture of him in a Colts jersey.. 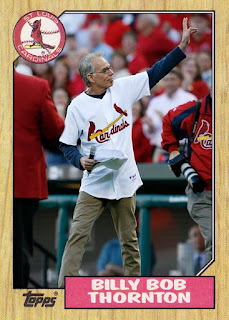