The origin of my friendship with Anthony Pinella started with Coca-Cola. The Pinella family owns Rex Italian Foods in Norridge, IL.and they had fantastic fountain Coke! While working or just in the area, I would always stop at Rex and get a Coke (and usually a cannoli, too).
I liked their Coke so much, it prompted me to write a story in the (now defunct) Lerner Newspapers, about my search for the best fountain Coke in the area. I went into the story knowing I loved the Coke at Rex, but I was willing to try fountain Coke at other places (all for the sake of the story, of course).
In the end, I honestly felt Rex had the best of what I tried (and I tried a lot). The White Hen near my house came in second and the Shell Station at Harlem and Higgins in Chicago came in third. Ironically, within a few months, all three stopped serving Coke. Fortunately, since then, Kostner Korner (previously the White Hen) and the Shell Station have brought back Coke.
Oh Rex, how could you turn your back on Coke? In all fairness, I still stop at Rex for my cannoli (and other food) needs. They do have many great dishes there.
Recently, NFL referee Gene Steratore paid a visit to Rex. Steratore was the Head Official for Super Bowl 52 earlier this year. Although he lives near Pittsburgh, apparently he heard about the delicious offerings at Rex Italian Foods and visited it on a trip to Chicago.
I usually still poke at Anthony about bringing back Coke. Even without Coke, it is still worth a visit (and that is a strong statement, considering my love for Coke). If you're in the Norridge area, check out Rex Italian Foods and tell them Johngy sent you (and to bring back Coke). 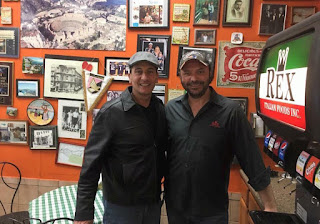 Gene Steratore and Anthony Pinella in Norridge, IL-February 2017.
Posted by Johngy at 6:00 AM