Born in Braddock, PA, John Clayton has had a Hall of Fame career in sports writing, reporting and broadcasting. Clayton earned "The Professor" moniker during his many years with ESPN. He earned his Celebrity Jersey Card from a first pitch in 2013. I do not know the player who appears with him, but I'll give Johngy Points to anyone who recognizes him. 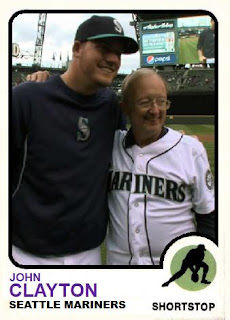 "The Science Guy" Bill Nye was born in Washington, D.C. and was an egineer with Boeing before starting his show business career. In 1993, he created the Bill Nye the Science Guy pilot for the PBS station in Seattle. I believe Nye is the first person to appear on a Celebrity Jersey Card with a bow tie, but that's his trademark. Mariners coach Roger Hansen joined Nye on the card. 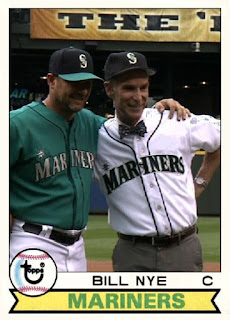