Celebrity Jersey cards is a recurring series in which I create virtual trading cards for celebrities wearing jerseys.

Born in Pizzoferrato, Abruzzo, Italy and raised in Pittsburgh, PA, Bruno Sammartino grew up to be a legendary pro wrestler. He holds the record for longest total days as WWF (WWE) champ and was a fixture on main events at Madison Square Garden. He is arguably one of the top 5 wrestlers of all time. His celebrity Jersey Card comes from his appearance at PNC Park, where he was greeted as royalty (and rightly so). 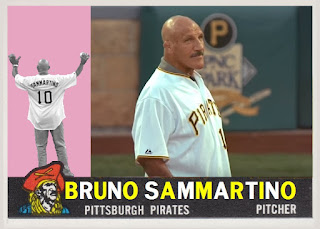 Scott Steiner was an accomplished wrestler at the University of Michigan. He joined brother Rick in the world of pro wrestling, forming the legendary Steiner Brothers tag team. After some success as a team, Scott went on to greater heights as a singles wrestler. Big Poppa Pump was a main eventer for many years. His Celebrity Jersey Card shows him delivering his devastating "Steiner Line" to the mascot. 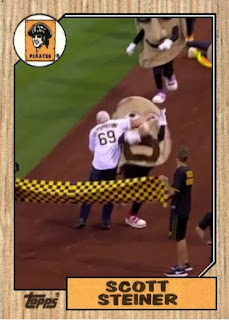