I met Jonathan Cimaglio at a Chicago Bandits game, where he is a regular.  He is a major autograph collector (or "grapher" as they are now called).  I couldn't even begin to guess how many autographs he has.  I am envious of his collection, but I know he puts a lot of time and effort into it.
Last year, he scored a big hit, that still hurts.  He met Jenny McCarthy.  Jenny has been on my list for years.  I met her a few years back at the NFL Draft, but couldn't get a picture.
Jenny is a Chicago area girl.  She's a bit wacky, but she is likable.  At the draft, she was with Donnie Wahlberg.  She would have done pictures, but it was a bad setup and even a selfie would have been impossible.
On the bright side, Jonathan had to wait about 4 hours for the picture.  Jenny was at Binny's to promote her vodka and the crowd was huge.  I was covering the Rockford IceHogs on that day, but I am not sure I would have committed 4 hours to seeing her. 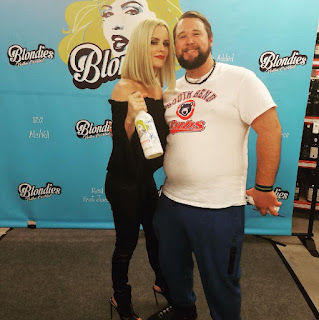 Jenny McCarty and Jonathan Cimaglio in Villa Park, IL-October 2017.
Posted by Johngy at 6:00 AM