Bobby "The Brain" Heenan was born in Chicago, IL and went on to have a Hall of Fame career in wrestling. Heenan had one of the quickest wits anywhere. I firmly believe in today's age, he would have had much more mainstream popularity and exposure. As talented as he was, he was just as nice. I had many dealings with Heenan and he was simply one of the greatest people I have ever met. Heenan's Celebrity Jersey Card comes from a wrestling appearance in Florida, which I happened to attend. The smiling wrestler with him is a young CM Punk. 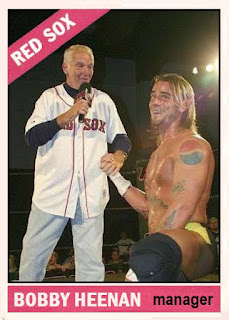 Born into the legendary Hart wrestling family in Calgary, Nattie Neidhart has gone onto a distinguished career. A two-time champ in the WWE, many feel Neidhart hasn't won more titles because she is just too good at making others look good in the ring. Either way, the third-generation star will end up in the WWE Hall of Fame when she retires. On her Celebrity Jersey Card, Neidhart is wearing her title belt, while holding the Red Sox World Series trophy. I believe the double trophies is a CJC first. 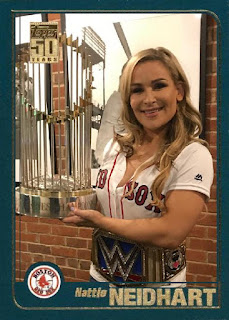