Quarterback Mike Rae played 4 seasons in the NFL. He was drafted by the Oakland Raiders in 1973, but made his NFL debut in 1976. Previous to that, he played in the Canadian Football League. After 2 seasons with the Raiders, Rae joined the Tampa Bay Buccaneers, where he played for 2 more seasons.
He later played in the USFL. He also signed with the Washington Redskins in 1981, but never played for them.
In his NFL career, he appeared in 28 games and threw for 1,536 yards and 12 touchdowns. As a backup to Ken Stabler and Doug Williams, Rae only started 8 games.
Those aren't stats that will get you on a Topps card, especially with the small football sets. Still, my fascination with backup quarterbacks and my general interest in seeing every player appear on a card led me to create "missing" cards for Rae. Surprisingly, I was able to find 3 legit action shots of Rae and the other was an in-game photo, which featured the legendary John Madden. 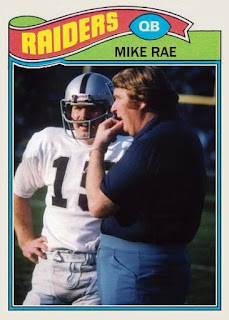 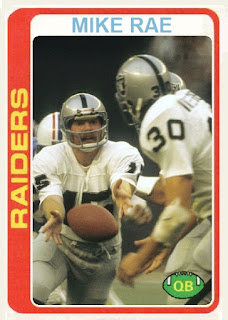 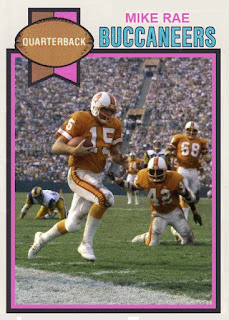 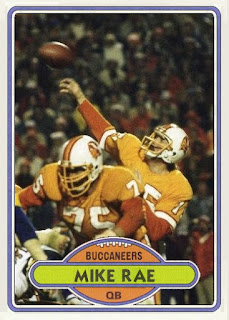 "Now here's a guy who takes an obscure player and BOOM! puts him in very realistic looking cards."
Those are great!

Thank you. As a kid, it drove me crazy that players were missing. Of course, I didn't realize the economics and the real demand. Still, as an adult, I like seeing my old missing favorites on cards from then.

Another great addition to my favorite running series among the many intriguing subjects that you field. Back-up QB's represent a niche that so many of us (especially old substitute teachers) can identify with! Keep 'em coming! I think I saw this guy back in '83 @ a L.A. Express game. "Buzz" Bryant