There are only a few things that can keep Chris Bejcek away from the Chicago Bandits during the season. If the Bandits are playing at home and Chris isn't in his usual seat behind home plate, chances are he is at a concert. If they would only schedule concerts while the Bandits are in their offseason, Chris would be very happy.
Earlier this summer, he missed a Bandits game for a concert. Afterwards, he met Mark Dawson, the lead vocalist and bass player for The Grass Roots. Born in Chicago, Dawson joined The Grass Roots in 2008.
With Dawson's Chicago roots, maybe there is a chance he can get the band to perform at Parkway Bank Sports Complex after a Bandits game. That actually would be the ideal scenario for Chris. He wouldn't even have to leave his seat.
The bandits season is still several months away, but it is never too early to look forward to softball. Check ChicagoBandits.com for news and updates. 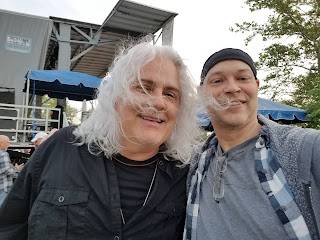