The Chicago Pop Culture Con runs November 24 and 25 in St. Charles, IL. Last year, they had a cool mix of guest celebrities, including several ex-Chicago athletes.
In doing my pre-con research, I saw Brian F. Colin was a celebrity guest. Brian is a video-game designer, artist and animator. He has worked on many video games, including the popular Rampage. Of course, I am a fan of Arch Rivals, a slightly lesser-known game, but one that I played frequently back in the day. My longtime bud Louie and I used to have quite the battles and I believe I hold the series edge by a game or two.
Arch Rivals was a basketball game, which featured a handful of court issues which could cause turnovers. Most importantly, the game had a punch feature which would allow your player to steal the ball from the opposition. It was so much fun, accept when you knew the punch was coming but you couldn't escape it.
Brian had some exciting news about Rampage, which he discussed in the interview we did. He also talked about Arch Rivals (as I stood in awe). My interview can be found at On the Beat With Brian F. Colin at Chicago Pop Culture Con.
Go to ChicagoPopCultureCon.com for more info and schedules. I'll be "On the Beat" and hopefully, I'll see you there. 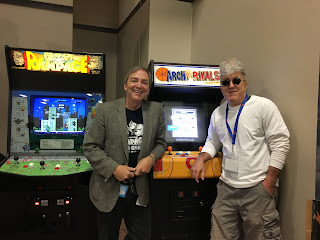