Celebrity Jersey Cards is a regular series in which I create virtual trading cards for celebs wearing sports jerseys. With baseball season finished and tv's Deal of No Deal back, we turn our attention to football DOND style.

Representing the Chicago Bears, Jenelle Moreno was briefcase model #17. She was discovered in high school and shot a spread for Teen magazine the next day. Rod Woodson of the Oakland Raiders joined Jenelle on her Celebrity Jersey Card. Richie Petitbon is probably the most successful #7 for the Bears, but Sean Payton also wore it during his brief stint with the team. 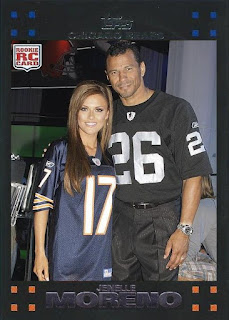 Pilar Laster was briefcase model #14. Like most opf the DORD models, Pilar has done modeling in addition to her work on the show. Hall of Fame running back Marcus Allen of the Oakland Raiders joined Laster on her Celebrity Jersey Card. Howie Mandel also makes a backwards appearance. 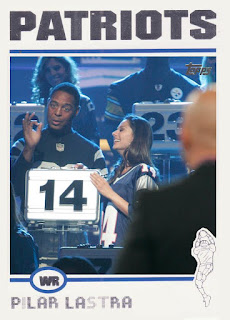