Ellen DeGeneres has had a long and successful career. She recently celebrated her 15th year hosting The Ellen DeGeneres Show. Ellen is also a big fan of football, particularly the New Orleans Saints and the Green Bay Packers, but she once wore a #75 Cincinnati Bengals jersey to honor Leah Stills, daughter of Devon Stills. Lead has battled childhood cancer and is currently enjoying a normal kid life as the cancer is in remission. The gesture by DeGeneres was captured and is now featured on her Celebrity Jersey Card. 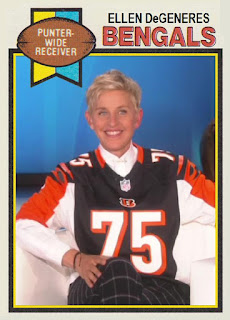 Scott Thompson was born in Florida and grew to fame as Carrot Top. He is a fan of Philadelphia sports teams. For his Celebrity Jersey Card, I choose to use his given name, although it might have been interesting to see this one with "Carrot Top" on it. He wore #46, which was most famously worn by former defensive back Herm Edwards. 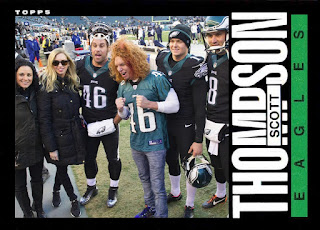