Michael Kingston is the creator of Headlocked, a cool wrestling comic, and gets to hang out with wrestling legends. How cool is that? Of course, Michael is also very hard-working. Any success he has has been well-earned.
Headlocked was created because Michael wasn't happy with the other comics that featured wrestling. Despite wrestling and comics having an overlapping fanbase, nobody had captured the wrestling world as it is. Headlocked is "an HBO-style drama chronicling an aspiring wrestler’s coming of age in the wrestling business."
Jerry "The King" Lawler jumped on board as the cover artist. Headlocked Kickstarter campaigns produced great results. Other wrestlers contributed content. It grew quickly in popularity.
Michael has worked very hard promoting, including several appearances at various comic cons. He is usually joined by several wrestlers at each appearance. One such occasion was at a comic con in New York last year, when Christian, Lita and Diamond Dallas Page were at his booth. That's a lot of star power.
It's more than just bringing in big names for appearances though. These wrestling legends are behind Headlocked. They believe in it and in Michael.
I've known Michael for several years, having met him at a comic con before Headlocked was an actual reality. I knew from his passion it would happen, just like I know it will continue to grow and become more successful.
One of the best parts is that Michael is a good guy. He puts a lot of effort into his work and into promoting it. He also spends time with eager writers like me. Michael has always had time for me and I appreciate and support his efforts.
One of my life goals is to appear in some way in Headlocked. I am sure I will get that chance with future Kickstarter projects.
I will keep providing updates on Michael's work here, but you can also check out HeadlockedComic.com for more info on Michael and the comic. You can also follow Headlocked Comic on Facebook. 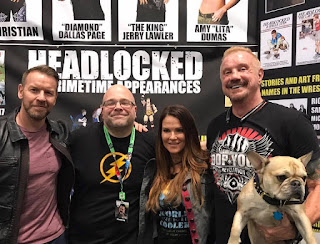 Christian, Michael Kingston, Lita and Dallas Page in New York, NY-October 2017.
Posted by Johngy at 6:00 AM