The Chicago Pop Culture Con runs this Saturday and Sunday in St. Charles, IL. Last year, they had a cool mix of guest celebrities, including several ex-Chicago athletes.
Paul Popovich was a classic reserve middle infielder. He had two stints with the Chicago Cubs. In between, he played a season and a half with the Los Angeles Dodgers. He finished his career with two seasons with the Pittsburgh Pirates.
Faithful readers now I have a fascination with backup catchers, but that also extends to backup QB's, backup goalies and even backup middle infielders. In short, I have a soft spot for long time backups.
Popovich was blocked by Don Kessinger and Glenn Beckert in his efforts to gain more playing time. Still, he carved a nice 11 year career in the majors.
At the Chicago Pop Culture Convention last year, we talked a bit about his time with the Cubs. He played with Hall of Famers Ron Santo, Fergie Jenkins, Ernie Banks, Billy Williams and Hoyt Wilhelm. He was here for the second half of the infamous 1969 season. He saw the veteran greats leave and the team turn into a mediocre mess in the early 1970's.
Popovich had nothing but praise for his former mates, especially Kesinger and Beckert. He looked and sounded great, especially for a 78 year old.
Meeting Popovich was especially cool. Back in his playing days, there weren't many player appearances like there are now. Basically, we had television, baseball cards and baseball magazines to get to know a player. I look at the picture below and it blows my mind remembering opening a pack of 1973 baseball cards and finding Popovich and now I am standing next to him. It doesn't seem odd in 2018, but in 1973, it didn't happen.
I look forward to seeing the celebrity guests this year at Chicago Pop Culture Con. Go to ChicagoPopCultureCon.com for more info and schedules. I'll be "On the Beat" and hopefully, I'll see you there. 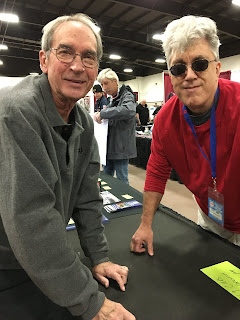 Thank you. Happy TG to you and yours!