Wizard World has taken over Madison, Wisconsin through Sunday, December 2. I'll be crossing the northern border to be "On the Beat." Over the last few days, I've recalled some of my memories from past Wizard World events.
For 22 years, Guy Gilchrist had been the writer/illustrator of the popular Nancy comic strip. Earlier this year, Gilchrist stepped away from the world of Nancy, Aunt Fritzi, Sluggo and the others in their world. Far from retiring, Gilchrist is concentrating on other projects, including some tv projects.
Nancy's origin dates back to 1922, when Fritzi Ritz debuted in newspapers. Nancy joined the strip in 1933, soon becoming the focal point. Nancy became the new strip title in 1938.
Gilchrist's final story arc saw Aunt Fritzi marry boyfriend Phil. Nancy took a 2 month hiatus after Gilchrist's departure, but has since returned with the strip's first-ever female author.
Starting his career in the late 1970's Gilchrist has been producing many forms of comic art and also some sports logos over the years. He has designed logos for Minor League baseball teams, including the Portland Sea Dogs, Norwich Navigators, and New Britain Rock Cats. 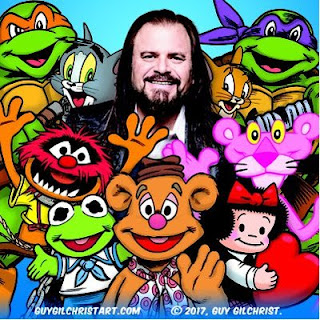 When I first met him at Wizard World, Gilchrist was happy to discuss his work on Nancy, as well as his other creations. I loved our conversation and also just listening to him talk to his many fans. He clearly has a deep passion for what he does. He lovingly described his characters as friends.
It had to be hard stepping away from Nancy, but he is still creating. I haven't talked to him since his career turn, but I hope to catch him at a future Wizard World.
Go to AGuyGilchristProduction.com for more info on this talented creator. There's a lot of fun stuff there, including an opportunity to have Guy "Muppetize" you!
Check out WizardWorld.com for more info and schedules. You can also check here for recurring coverage year round. 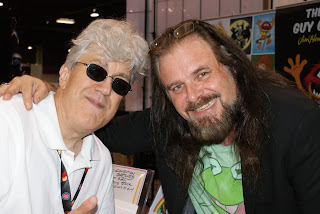