The Chicago Auto Show is coming February 9-18. While I am looking forward to the event, I am recalling some of the fun from last year's CAS.
As I have written, ABC7 Eyewitness News had a big presence at last year's CAS. Jim Rose and Tanja Babich were two of the personalities who appeared.
Rose was born in New Jersey and graduated from Rhode Island College. He came to ABC7 in 1982, just a few years after starting his career. Since then, he has become one of the most respected broadcasters in the city.
A native of Toronto, Canada, Babich graduated from Cornell University. She originally intended to interview to become an intelligence officer, but a public speaking engagement lead her to pursue broadcasting. She joined ABC7 in 2014, after working in New York for a few years.
Despite Rose being very visible on the Chicago scene, I had never met him prior to CAS. We talked a little sports, of course. Ever the humble guy, Rose Dow2nplayed the fact that he has joined the likes of the legendary sportscasters of the area, like Tim Weigel, Johnny Morris and a select few others. His 35+ year career speaks for itself though.
Rose and Babich graciously talked to a lengthy line of fans and even stayed longer than their scheduled shift. Rose, babich and everyone at ABC7 really went above and beyond at the CAS.
Go to ChicagoAutoShow.com for more info. You can also follow the Chicago Auto Show on Facebook and the Chicago Auto Show on twitter for updates, scheduling and more info. You can also follow Rose at @JimRoseABC7 on twitter and Babich at @TanjaBabichABC7 on twitter. 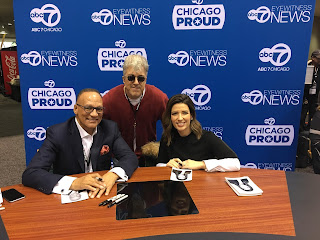