Michael West is an Indiana-based best-selling author. I first met Michael at Days of the Dead in Indianapolis several years ago. My first interview with Michael can be found at On the Beat With Michael West at Days of the Dead 2012. I have interviewed him a few more times, as I have followed his career. His latest book Ave Satani is available on Kindle. It "tells the story of a legendary film composer's even more legendary final score - music written for an Italian Horror film from the 1970's that was ultimately never used."
While I met Michael at his booth at Days, he is also very much a horror fan and often meets his favorites at Days events. I probably have more pictures with Michael as a fan than at his booth. Fortunately, he is very gracious in either case.
At Days in Chicago, Michael met actor Dirk Benedict, star of The A-Team television series and the original Battlestar Galactica film.. Benedict also appeared in horror flicks, like Mark of the Devil and Demon Keeper. Between his horror films and the other previously mentioned roles, Benedict has become a popular guest at comic cons.
It is always cool to see people like Michael meeting thei favorites. It's interesting to see who they want to see, but also just to see that they want to meet others. They are just regular people and they get excited about other celebrities.
At the recent Days last year, I was talking to several other authors and Michael's name was brought up each time by them, Every other author had nothing but praise for him. It was cool to hear unsolicited positive reviews for the man and the writer. I must say he deserves whatever credit he gets.
A master of the horror genre, one of Michael's most recent books is The Legacy of the Gods Book Three: Zeus’ Warriors. The third book in this series, it is a book of dark fantasy at its best.
Go to ByMichaelWest.com to get more info about this great author. You can also follow Michael West on Facebook for updates. 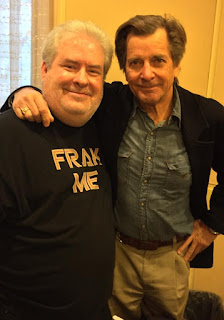 Michael West and Dirk Benedict in Schaumburg, IL-November 2018.
Posted by Johngy at 6:00 AM