This is a regular series in which I create virtual trading cards for celebrities wearing jerseys. With the start of the baseball season today, we will once again work our way alphabetically through all of the Major League Baseball teams.

New Jersey native Patrick Warburton has a lengthy resume of acting roles and voiceover parts, but it was his performance as David Puddy on tv's Seinfeld which is arguably his most famous part. I had the pleasure of meeting Warburton at a Global Traveler event and he could not have been nicer or funnier. Warburton's Celebrity Jersey Card comes from his role in Angels in the Infield. 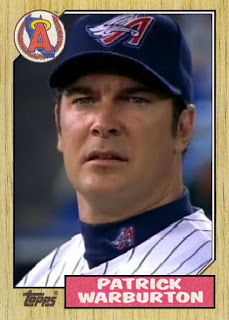 Born in Alabama, Donna D'Errico was a model and a Playboy centerfold, before landing a role on tv's Baywatch. While remaining active in acting, D'Errico trained to climb Mount Ararat in Turkey in search of the frozen remains of Noah's ark. She climbed Mount Ararat in 2012, but suffered a major injury near the end and returned home. She also produced a documentary about the experience. D'Errico earned her Celebrity Jersey card while playing ina charity game. She gets extra points for the hat and glove. Her #4 Angels was most famously worn by Bobby Grich. 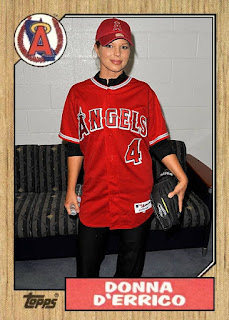