Cards That Never Were is a recurring series in which I create virtual trading cards for players missed in various sets.  It is a concept I have borrowed from far too many to list, but I appreciate all of them.
Catcher Phil Roof made his MLB debut with the Milwaukee Braves in 1961, playing in one game.  He returned to the MLB with the Braves in 1964, again playing one game.  Over the next several seasons, he would stay in the big leagues, playing for the Angels, Indians, A's and Brewers.  Midway through th 1971 season, he was traded to the Twins, which would mark his longest stint with any team.  He stayed with the Twins, until midway through the 1976 season, when the Chicago White Sox claimed him off waivers and sent him to Iowa for a bit.  He did see action in 4 games for the Sox in 1976.  He was traded by the Sox to the Toronto Blue Jays in October of 1976.  He finished his career with one season with the Jays.
His first card was a 1963 Braves multi-player Rookie Stars card.  He followed that with multi-player Rookie Stars cards in 1964 with the Braves again and 1965 with the Angels.  He got solo cards from 1966 through 1977, which was a decent airbrush job of him as a Blue Jay.
That's a fairly good representation for Roof.  He could have gotten a 1978 "career capper," but I'll get back to that later.
Since he played for the White Sox, I really wanted to make a 1977 card that would reflect that.  I had been searching for a long time, but understood considering he only played four games with the team.  I finally found a decent shot and tried to colorize it.  It isn't the best, but at least Roof now has a baseball card home with the Sox.
I could make a 1978 card for him, reusing his 1977 OPC picture with the Blue Jays, which was not airbrushed.  I don't like to reuse pictures and the cropping would make it a pretty small image to use.  In either case, I am very happy with finally recreating Roof's 1977 card. 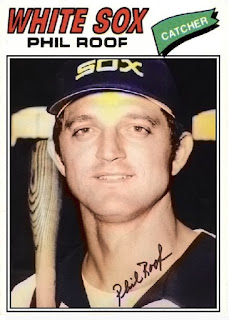 This card is awesome!! I have been searching for a decent quality White Sox photo of Phil Roof for a long time to no avail.