Mickie James was born in Virginia and rose to fame in wrestling rings. She is a 6x women's champ in the WWE and a 3x women's champ in Impact Wrestling. She also is an accomplished singer, having released two albums. Part Native American of the Powhatan tribe, James was inducted into The Native American Music Awards Hall of Fame. James held her custom Mets title belt for her Celebrity Jersey Card. 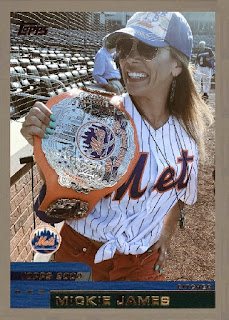 Born in Tampa, FL, Leah Van Dale spent time as a cheerleader for the New England Patriots and the Los Angeles Lakers, before finding fame as Carmella in the WWE. She is a lifelong wrestling fan and idolized WWE legend Miss Elizabeth. Carmella won the Money in the Bank match in 2017 and brought her case with her for the Mets wrestling night. This is the first MitB briefcase to appear on a Celebrity Jersey Card, but it probably won't be the last. 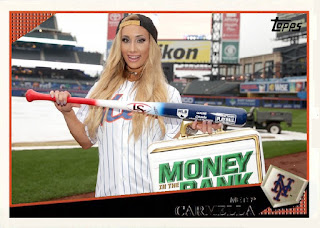