Born in Pennsylvania, Joan Marie Larkin rose to fame as Joan Jett. Whether fronting the Blackhearts, or the Runways or performing solo, Jett is a true Rock and Roll Hall of Famer. A longtime supporter of the Orioles, Jett even wore an Orioles jersey while sitting in the front row at Yankee Stadium in the 1980's.Jett has worn many Orioles jerseys, but this one appears to be a Manny Machado jersey. Jett earned her Celebrity Jersey Card while on the field at an Orioles game. 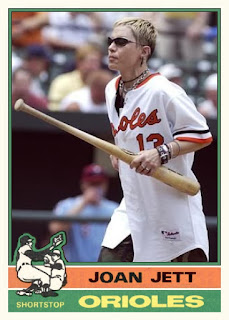 Native New Yorker John Williams has carved out a Hall of Fame career composing music. Perhaps best known for his work on the Star Wars franchise, earlier Williams composed music for television shows including Gilligan's Island, Lost In Space and other favorites. He has won 24 Grammy Awards, 5 Academy Awards and 4 Golden Globe Awards. Williams looks like he could be a pitching coach on his Celebrity Jersey Card. 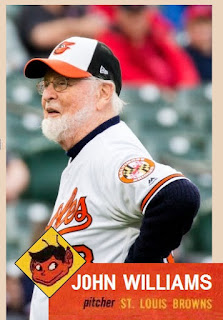