A native of Kansas City, MO, Aaron Dontez Yates is better known as rapper, singer, songwriter Tech N9ne. His stage name originated from his fast-rhyming chopper style, which is reminiscent of a TEC-9 semi-automatic handgun. Tech N9ne's Celebrity Jersey Card comes from his appearance in the Big Slick Celebrity Classic charity game. Looking at the swing, it appears that he might be a bit ahead of the pitch or maybe he just connected on the pitch. I guess it depends which way the ball is headed. 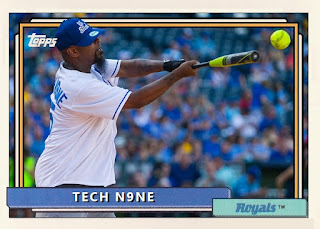