Catching Up With Natalie Halvorson of DePaul Softball

The DePaul women's softball team had a very successful 2019 season. The Blue Demons won the Big East tournament. A key contributor was pitcher Natalie Halvorson.
Natalie appeared in 39 games, starting 26 while going 21-8 with 2 saves and a 3.06 ERA. She had 12 complete games, including 2 shutouts. In 180.2 innings, she had 106 strikeouts while only allowing 41 walks. She held opponents to a low .255 batting average.
Natalie came to DePaul after a season at Kirkwood Community College, where current DePaul assistant coach Joe Yegge was her head coach. Their connection went back to her playing days in 8th grade. Natalie was a second team NFCA All-American in NJCAA Division II.
Natalie went the distance in the game to get the Demons to the championship game. She allowed only 4 hits, while striking out 5 and walking none. After the game, I had the pleasure of interviewing Natalie. My interview with Natalie can be found at On the Beat With Natalie Halvorson.
Last Sunday, I was back "On the Beat" as Northwestern and DePaul split a doubleheader in Fall Ball. It was great seeing the teams again. I caught up a bit with Natalie after the game. She is really looking forward to next season.
We are all looking forward to next season. Big things are expected for the team and for Natalie in her junior season.
I will be back "On the Beat" next season covering the Demons and the Wildcats for this site, Patch.com and GlobalTravelerUSA.com. You can also check NUSports.com and DePaulBlueDemons.com for more info on the teams.
The season starts in February, but home games don't start until mid-April. Especially with winter looming, I cannot wait to get back to the softball diamond! 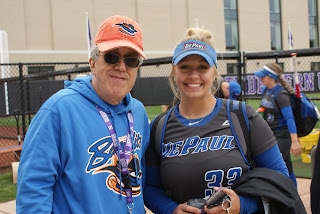 Natalie Halvorson and me in Evanston, IL-October 2019.
Posted by Johngy at 6:50 AM