This is a regular series in which I create virtual trading cards for celebrities wearing jerseys. Done with all of the MLB teams and awaiting the winner of the World Series, here are a couple baseball-hockey transitions.

Bill Russell played 18 seasons for the Los Angeles Dodgers, mostly at shortstop. The 3x All-Star hit .263 with 1,926 hits in his career. Later, he managed the Dodgers for 2+ seasons, going 173-149. He is still a popular figure in Los Angeles, as proof by his appearance at a LA Kings game, along with teammate Steve Yeager. While that night gave Russell a Celebrity Jersey Card, I think he should have worn the old school royal blue and gold Kings jersey. 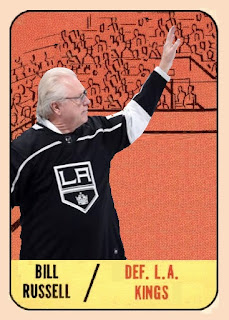 Steve Yeager played 14 seasons with the Dodgers, before finishing his career with one season with the Seattle Mariners. The catcher hit .228 with 816 hits in his caeer. He was the 1981 World Series MVP. Like Russell, Yeager earned his Celebrity Jersey Card on a night when the Kings honored the former Dodgers. Russell and trainer Bill Buhler invented the hanging throat protector for catchers. Yeager had a small role in the Major League movie franchise. Like Russell, Yeager should have gone old school with royal blue and gold. 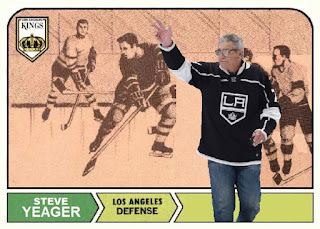