When Wizard World announced wrestling legend Rob Van Dam for the Chicago show, I immediate texted my bud Tommy Else and told him to clear a day. Knowing RVD was his guy, I wanted to facilitate his first encounter with his favorite.
Tommy joined the Johngy's Beat crew on Saturday and immediately went to RVD's booth. It was cool to see the exchange. I know how I felt when I met Roddy Piper for the first time and I saw that look in Tommy's eyes.
From his social media post, Tommy summarized the experience.

This was a really big deal for me...
ESV meets RVD!
When I started really getting into wrestling in 99' RVD was the 1st talent to stand out to me against the rest. His style, his gear, his charisma... He was my 1st "Favorite Wrestler" and tied with Chris Jericho remains so to this day.
Today I got to tell him as much, and he was every bit as cool as I'd hoped he'd be. I could have hung out with him all day.
Thank you to John Wroblewski for helping make this dream a reality. This was definitely a bucket list item for me, and I still hope The Resistance brings him in someday so I can drive him around.
I didn't think I had it in me anymore to "mark out" for someone... but I damn sure did for "The Whole F'N Show" ROB... VAN... DAM!

When favorites of my friends appear at Wizard World, I always try to offer them the chance to join me. I am very happy I got to help Tommy with RVD. Chris Jericho is his other favorite and if he ever makes an appearance, I will make sure Tommy is there again.
The next Wizard World is in Madison, WI October 25-27. For more info, check out WizardWorld.com. 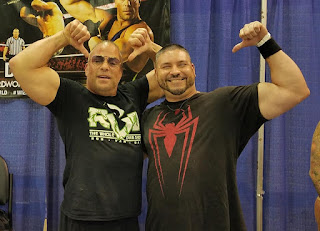