Celebrity Jersey Cards is a weekly series in which I create virtual trading cards for celebrities wearing sports jerseys. With baseball season over, we turn our attention to the best and worst teams in football.

Born in Pennsylvania, music star Taylor Swift has been known to wear sports jerseys in concert. Swift will perform at the Super Bowl LIV in 2020. It's quite possible the New England Patriots, who are 8-1, will again be the AFC team. Swift wore a Pats Jersey in concert to get a Celebrity Jersey Card. Her #13 was an odd choice, although she has worn other numbers for the Pats. I somehow doubt she was a Tommy Hodson fan. 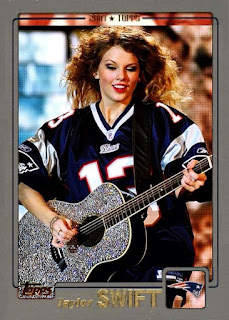 A native of Houston, TX, Beyoncé Knowles-Carter is one of the rare celebrities famous enough to be recognized with one name. I think her Celebrity Jersey Card came from a simple fashion choice by Beyoncé. I don't believe it was a special occasion. I'm assuming the #9 is for former QB Carson Palmer and not former kicker Doug Pelfrey. 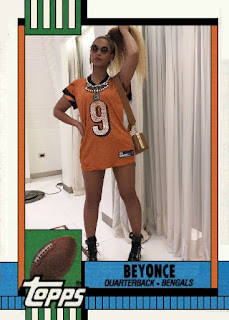