Demolition at Days of the Dead Chicago 2017

Days of the Dead Chicago is quickly approaching. While looking forward to a weekend of horror fun, I look back at some of my favorite moments from previous years at DotD.
Today's feature celebrities have a unique connection with DotD. Demolition is one of the greatest tag teams that probably wasn't expected to succeed on such a high level. The WWF packaged veterans Bill Eadie and Randy Colley as the face-painted, heel tag team Demolition, which most felt was a copy of the legendary Road Warriors. Colley was too recognizable as former Moondog Rex, causing him to be replaced with Bill Eadie. Demolition went on to win the tag titles twice. When Eadie had some health concerns, Brian Adams was added to the team as Crush. Demolition won another tag title under the "Freebird" rule.
After the Road Warriors joined the WWF, Demolition soon started to take a less prominent role and eventually broke up. All three resumed solo careers elsewhere, with Adams unfortunately passing away in 2007. Eadie and Darsow occasionally still appear on the indy circuit as Demolition.
Much like Demolition's success was a bit of a surprise, wrestling legends at DotD also succeeded beyond expectations. In fact, some fans were even upset that wrestlers were appearing at DotD. They cringed at the intrusion into the horror world. The results peak for themselves though. Long lines of other happy fans for virtually every wrestler at DotD prove it was a wise addition to the celebrity lineup.
It was really fun meeting Eadie and Darsow at DotD a couple years ago. The two seemed very happy to be in contact with all of their fans, several of whom came with their faces painted in tribute. Demolition and the individuals have been out of the national spotlight of the WWF for 25+ years, yet they still drew a large amount of fans.
Go to DaysoftheDead.com for all of the info. Also, check the Days of the Dead Facebook page for more frequent updates. 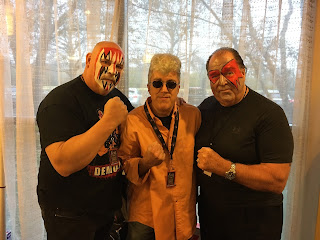 Demolition and me in Schaumburg, IL-November 2017.
Posted by Johngy at 6:00 AM