New York born Mary Tyler Moore starred in two of the most classic tv shows, first The Dick Van Dyke Show, followed by The Mary Tyler Moore Show. The latter was set in Minneapolis, which ties in her Minnesota Vikings jersey. Moore wore the #10 Fran Tarkenton while washing a car, but I am unsure if this was from the actual series. Either way, it landed her on a Celebrity Jersey Card. 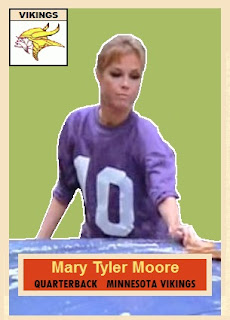 Also born in New York, Regis Philbin had a legendary career, which saw him as popular as ever, if not more, late in his career from his Regis show, as well as the wildly popular Who Wants to Be a Millionaire? Philbin showed off his guns on his Celebrity Jersey Card, while wearing a #1 jersey, presumably for him, and not any of the four one year wearers of #1 with the Jacksonville Jaguars. 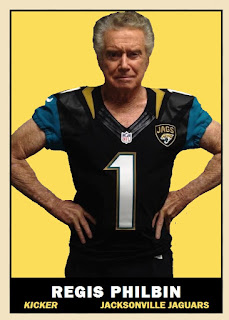 I had a huge crush on Mary Tyler Moore when I was a kid. It was sad to hear she passed away a few years ago.

There was a show early on when Mary is gonna interview "Fran Tarkenton" she doesn't know he's the Vikings QB and she also thinks he's a woman. Great stuff.

John Sharp-Thanks for that info. I didn't know (or remember).
Fuji-You weren't alone on either front.