This is a regular series in which I create virtual trading cards for celebrities wearing jerseys. Today I feature two of my favorite singers.

I have loved Haley Reinhart since I first heard her perform "Creep" on YouTube. Although I'm not a concert guy, nor much of a fan of music later than 2000, I make the exception for Haley. A Chicago area native, she first rose to fame on American Idol. She gained more success when her version of "Can't Help Falling in Love" was used for a gum ad. I have had the pleasure of meeting Haley three times and she is simply adorable, fun and friendly. Much like her music, Haley's Celebrity Jersey Card is a bit of a throwback, featuring an old/new Chargers jersey, specifically #18 of Charley Joiner. A native of Mississippi, LeAnn Rimes burst onto the country music scene at the young age of 13. Over the years, her music has crossed over into the pop genre, but either way, her voice continues to be one of the best ever. For her Celebrity Jersey Card, Rimes went to her music roots with the Tennessee Titans. I'm calling the #4 a Ryan Succop jersey, but I wouldn't argue with Rimes if she disagreed. 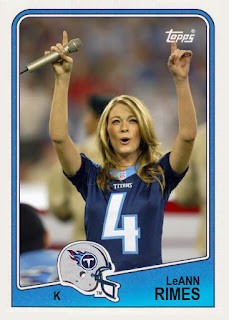