Last season, my buddy Tony Feddeler made his return to the Chicago Bandits ball park. He had been to Bandits games in the past, but was busy and missed some time. When he saw a few former Bandits were in town to play the Bandits, he made his triumphant return.
Tony is a great guy. He's a knowledgeable fan. We sat in the front row, right behind the catcher. Tony started a running gag of calling pitches, although the pitchers seemed to go opposite of his intentions. (oddly it worked for them). This caused his mock frustration and also his determination to get them on track.
At his next game, we developed a new running gag, althogh the pitch call occasionally reappeared with similar results as last time. It is just a fun time with Tony.
After one of the games, Tony got a picture with Gwen Svekis, the Bandits catcher. Gwen came to the Bandits from the University of Oregon and has been a valuable asset behind the pate and at bat. She is also one of the most fan-friendly players (although the whole team is very good with fan relations).
I hope Tony comes back to games next season. I am sure Gwen will be there. I know I will be there. I highly encourage everyone to join the fun. You can also get pictures with the players after the game and maybe, Tony, too!
Go to ChicagoBandits.com for more info on the upcoming season. Also, check the Chicago Bandits Facebook page for more frequent updates. 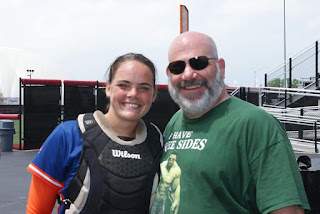