A couple weeks ago, the Legends Football League announced there would be no 2020 season for the league. It is unclear at this time if the LFL will be back in 2021 or ever.
My association with the Chicago Bliss began in 2013. I met and interviewed Heather Furr, Alli Alberts, Vejurnae Leal and Tracy Barnes at a sports convention. I covered the team on and off since then.
If it was my choice, I would have covered the tram consistently throughout the years, but LFL management had their way of doing things and outside media wasn't always welcome.
You might ask why a league with so little coverage would turn away any media outlets. I asked that question many times to many people involved in the LFL. I never got a great answer. They always wanted me to do some coverage, but in the later years, it was only on their terms.
Lack of media coverage is certainly part of the reason why the LFL is inactive for now. Lack of promotion is another reason.
I've said many times that the LFL should be a gold mine. It should be a major success. Elite women athletes, who happen to be very attractive and playing in rather skimpy uniforms seems like a recipe for success. Yet, here we head into 2020 without the LFL.
I've also said many times that other things were happening behind the scenes. The players made no money. The coaches probably weren't extremely well-paid. Expenses seemed to be at a minimum. Where did the money go? Why wasn't the LFL thriving? I am assuming it wasn't making a lot of money, because why would it fold if it was highly profitable. It just doesn't make sense to me. Maybe as time passes, more of the picture will be revealed.
Either way, I am left with a lot of great memories from my time covering the team. I met a lot of awesome people. I saw exciting football action. I made wonderful friends and now enjoy seeing them succeed in other areas in their lives.
One such example is the Rockstar Heather Furr. One of my first interviews with the Bliss, Heather truly lived up to the Rockstar moniker. Heather might not have been the most talented QB, but what she lacked in pure ability, she more than made up with grit, intelligence and hustle. Heather was a winner.
Like the rest of the LFL operations, the treatment of Heather was questionable. I would have made Heather the face of the league. An MVP QB in Chicago with a great look and an awesome personality should have been marketed to the moon. Instead, it almost seemed like the LFL tried to downplay her.
I have a ton of respect for Heather and I appreciate all she did for me over the years. She always had time for interviews. She was always willing to talk on or off camera.
Heather moved on from her LFL career into real estate. I have no doubt she will be a major success there, too. As I wrote, Heather is a winner.
You can find Heather on Facebook. You can also follow Heather at @HeatherFurr on Instagram. 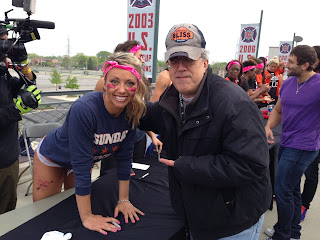 My understanding is that there WILL be a 2020 season, but the league will be renamed the X League (Extreme Football League). Might cause some confusion with the XFL (and apparently there's an X League American football league in Japan) but there you go. https://www.totalprosports.com/2019/12/18/legends-football-league-has-been-re-branded-will-now-be-called-the-extreme-football-league-video-pics/

Yes, I heard all about the "new" league. I'll be addressing that in the future. Thanks for reading and commenting.