Kansas native Richard Christy is one of the biggest Chiefs fans. The longtime member of the Howard Stern Show has spoken of his Chiefs fandom many times on the air. He even cried when meeting Pat Mahomes last year, as Mahomes promised a Super Bowl win (and delivered it this year). Christy is wearing #92, probably a Tanoh Kpassagnon, jersey and naturally chugging some alcohol. This is the perfect Celebrity Jersey Card for Christy, although he will probably have an updated version wearing a Mahomes jersey, because he's his faaaaaavorite. 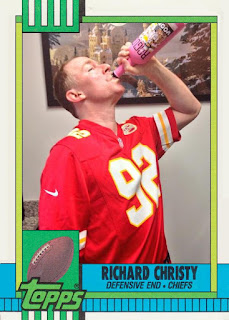 Samantha Ann Quek, MBE is a former British field hockey player. She won a Gold medal as part of the British team at the 2016 Summer Olympics. I don't know of any Kansas City connection, but Quek is showing off her Gold medal while wearing a Chiefs #25 jersey, presumably Jamaal Charles. Quek is currently a columnist. 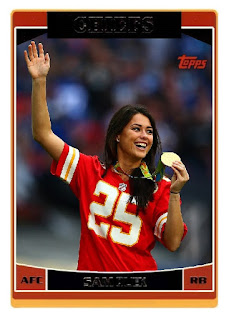