Celebrity Jersey Cards is a regular series in which I create virtual; trading cards for celebrities wearing jerseys. In honor of Black History Month, I present two important figures in black history.

Born in Alabama, John Lewis is a politician and a civil rights leader. Lewis was one of the 13 original Freedom Riders, seven whites and six blacks who were determined to ride from Washington, D.C., to New Orleans in an integrated fashion. Lewis paid a price for his beliefs, but he never wavered and pressed on. He has been the U.S. Representative for Georgia's 5th congressional district since 1987. He wrote a graphic novel March, about the civil rights movement. The Washington Capitals invited Lewis to drop a ceremonial puck. Lewis earned his Celebrity Jersey Card when wearing the Caps jersey, although I do not know any connection to the #65. 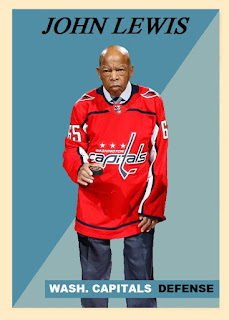 Canadian Willie O'Ree is referred to as the "Jackie Robinson of hockey," because he broke the color barrier in the NHL when he plkayed for the Boston Bruins. Making his pro debut in 1956, O'Ree made it to the Bruins the next season, despite being blind in his right eye. In parts of two seasons with the Bruins, O'Ree played in 45 games, but his pro career continued through the '78-79 season, when he played 53 games for the San Diego Hawks of the Pacific Hockey League. In 2018, he was inducted as a builder into the Hockey Hall of Fame. The Phoenix Coyotes honored O'Ree, inviting him to drop the ceremonial puck. This moment earned O'Ree his Celebrity Jersey Card. Neither the Coyotes (nor the Winnipeg Jets, their predecessor, were around when O'Ree made history. 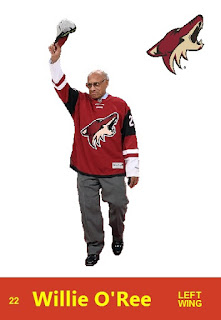 Both of these are fantastic!