Celebrity Jersey Cards is a regular series in which I create virtual; trading cards for celebrities wearing jerseys.

Lynda Carter is an actress, singer, songwriter, model, and beauty pageant titleholder, who was crowned Miss World USA 1972. Her resume is impressive, but to most of us kids of the 70s, Carter is Wonder Woman!Carter starred as the title character on the great show for three seasons. Although she is a native of Phoenix, Carter's Celebrity Jersey Card depicts her with the Washington Capitals, which seems natural considering her role as government agent Diana Prince (Wonder Woman's alter ego). Carter gets extra points for the Wonder Woman pose! 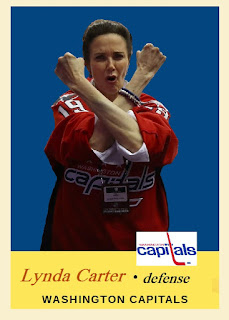 Kim Alexis is a model and actress. She was one of the top models of the 70s and 80s. New York native Alexis is divorced from former NHL hockey player Ron Duguay, but her Celebnrity Jersey Card shows her in full uniform of the Rangers. 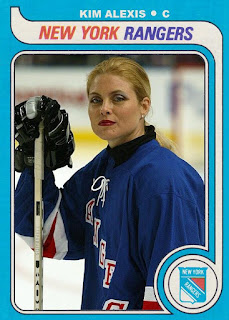 Nice. I had a mad crush on Lynda Carter back in the day.

You and me both, buddy!