Doug McWilliams is a huge part of the history of baseball cards. From the early 1970s through 1995, McWilliams was one of the main photographers for Topps. The first picture of his that Topps ever bought was of George Hendrick, although they did not use it for a card. His first picture bought and used by Topps was Vida Blue. In 2010, McWilliams donated more than 10,000 negatives of his photographs to the Baseball Hall of Fame. After being responsible for so many of the baseball card pictures, it is only fair that McWilliams appears on one. This Celebrity Jersey Card features McWilliams wearing #50, presumably to represent his 50 years of photographing baseball. 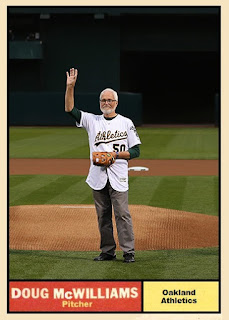 Based in San Francisco, CA, Michael Zagaris rose to fame shooting rock and roll and fashion. He eventually concentrated on sports photography and became the official team photographer for the Oakland A's and San Francisco 49ers. Like his photography colleague, Zagaris deserved to be "carded" and his Celebrity Jersey Card, featuring him in an A's jersey,  serves that purpose. 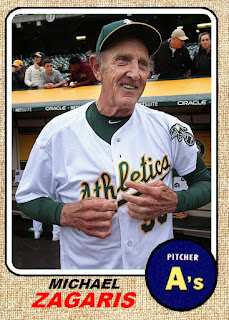